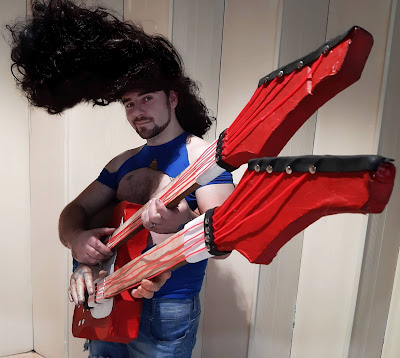 I would like to introduce you all to my good friend Mr Multiverse Cosplay (pronouns he/him). I met Mr Multiverse and his husband Atuin Cosplay through comic cons, this wonderful hobby and our mutual love of Harry Potter and wands! They own an incredible wand business called Octarine Wands which I highly recommended. You will learn more about that in an upcoming feature! They are both the most genuine, lovely people you could hope to meet.

Mr Multiverse Cosplay is very passionate about his craft which you can see through the creativity in his work. The name 'Mr Multiverse' is a nod to Steven Universe which is one of his favourite fandoms. He has appeared at Brighton Comic Con as a guest cosplay judge and attends conventions up and down the country throughout the year. He is also a huge LBGTQ advocate and a leader for body positivity.

Mr Multiverse Cosplay is an Instagram sensation! Make sure to go and check out his Instagram @mrmultiversecosplay to check out more of his great work! 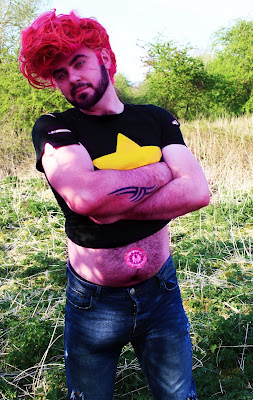 When did you start cosplaying?
MCM London Comic con, May 2016, I cosplayed as Star Lord!

How did you get into cosplay?
I've always been obsessed with dressing up, Halloween is absolutely the best time of year for that reason. After being invited to Comic Con I researched the event and discovered cosplay!

How long have you been cosplaying for?
5 years, unless you count dressing up as a Werewolf for Halloween, in that case since I could grow a beard!

Which characters have you cosplayed?
A broad range! Steven Universe, Link from The Legend of Zelda, Super Heros, even a few Memes!

Do you have a favourite costume?
Steg Multiverse, from Steven Universe. He has massive hair and four arms, what's not to love?! Total 80's vibes 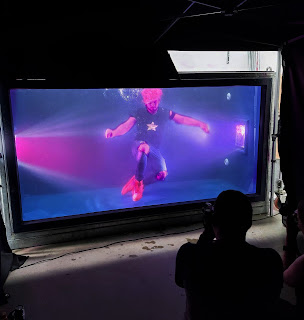 Do you act in costume or purely look like the character?
I make sure to know a few quotes of the character but acting is not my strongest skill!

Do you make/buy/commission your costumes?
I make them! I love working with foam. Sewing is something I struggle with but hey, if no one sees it, then hot glue is just as good as a needle and thread!

What skills have you learnt cosplaying?Woodwork, foam work and Blacksmithing, which is an unusual but fun skill!

Where do you tend to shop for cosplay costumes and accessories?
Charity Shops are the best places for belts, jewellery, and random items! Otherwise, I buy my foam and materials online wherever is cheapest!

Do you have any costume tips/tricks to share?
If a costume has fur components, style them! A little bit of hairspray can turn a plain fluffy trim into a textured, detailed addition to your cosplay.

Who is your favourite comic book character?
I actually kind of suck when it comes to comic books. I've read some with Nightwing and he is pretty hot Cool.

What are your personal fandoms?
Steven Universe, The Legend of Zelda and Monster Hunter!

Body positivity is a very hot topic in cosplay now. There seems to be pressure to be a certain shape/weight/look to pull off certain characters. There can be a lot of negativity in terms of trolling within groups based on people’s appearance. How have you found the cosplay community personally?
Largely very welcoming and positive! Of course, the unpleasant people are usually the loudest. I am a tall, beefy, hairy guy and I will cosplay any character I like. That is how it should be. If a person wishes to lose weight or work out for a cosplay then that is their choice and I will support them in that, but anyone can cosplay anything and should be supported and encouraged! If you are having fun, you are doing it right! 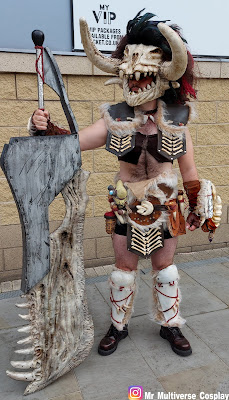 Those who follow your Instagram will know you’re very much into your fitness. Do you
work on your fitness for cosplay at all?
I do! I enjoy exercising as it is but using a certain cosplay as goal to aim for is a huge help. Part of my Cosplay style I suppose is Bara, the Anime/Manga word given to large, beefy men!

Tell us about your current nutrition and exercise regime and are you doing this for a particular character?
I am never very strict with either! I make sure to lift weights a few times a week, and try not to eat too much junk food, but I don't stick to a strict diet as I know I will fail at it, and sometimes I would rather watch cartoons than go to the gym. Pushing yourself is important but going easy on yourself sometimes is important as well.

Do you have any advice for anyone starting their own fitness journey?
You will progress a lot more consistently if you are kind to yourself. Ease into going to the gym and dieting. If you can only stand to do 2 hours a week working out, that is 2 hours more than you would have done!

Have you done any charity work as a cosplayer?
I had my legs waxed whilst dressed as Harry Potter, that was a harrowing experience, and I am almost certain that the hair has still not fully grown back. I've also made a few messages in character for children and donated a number of props and hand carved wands as well.

How do you feel about character adaptations of a costume rather than making a carbon copy of what’s in print/film etc?
I am 100% here for that! As I mentioned I am a big, beefy hairy guy! Harry Potter is not. I love seeing people giving their own take on a character. The creativity some people have is astounding.

What is the best and worst piece of cosplay advice you’ve received?
The best would be to have confidence in your own creation, and if you don't, then fake it! No one sees what’s on the underside of your armour, people won't see the messy seams inside a cloak or the smudged body paint on your neck. You are wearing a costume that is either made or brought, you are having fun and celebrating your weirdness. Fake confidence will lead to the real thing!

The worst advice I would say was being told to not eat or drink whilst wearing armour, to avoid toilet breaks. Armour cosplays are bulky and take a long time to put on and remove, but cosplay should never be detrimental to your health!

As a dab hand at attending conventions and events do you have any advice/do and
don’ts to share?
DO be supportive of other cosplayers! If you see a cosplay you like, ask for a photo! Talk to the person about their costume! This is especially important if the person looks like it may be their first time at a Convention. You could very easily make their day 100 times better!
Don't be too quick to judge. This goes for a lot of things, but one experience stands out the most. Conventions are very big events and are getting more and more popular. As cosplayers we know the general etiquette, not to touch someone’s cosplay without consent, to always ask for photos. If it is someone’s first time at a con, they are going to be excited and may overstep boundaries. A gentle word informing them of the correct rules is a lot better than shouting at someone in front of countless others. Always assume Ignorance rather than Malice.

What has been one of the coolest things to come from cosplaying?
I suppose 'cool' is subjective, but for me, the confidence to talk to people. Prior to cosplaying I was extremely quiet, talking to a stranger was next to impossible. When I cosplayed as a character, it felt as though the character was a form of shield between me and another person, and over time that has given me so much more confidence in life!

What other cosplayers do you admire?

@madebygahh They have incredible sewing skills!

Do you have any advice for people looking to do cosplay photoshoots?
Tell the photographer what you want. The more they know about you, your character etc, the better the photos will be!

What do you like to do when you’re not cosplaying?
Work on cosplays! As well as carving Wands for our business, or just spend time with my Husband and cats!

For people wanting to get into cosplay, what advice would you give them?
Do it. Buy a costume, make it from cardboard and cheap fabric, raid a charity shop. Just make a costume of a character you love and have fun! Next time you can improve your sewing skills, you might see another character and want to cosplay them, you might find someone to commission a cosplay from. Everyone starts at the beginning; you will have so much fun!

What are your future cosplay plans?
As I type this, I am also ordering LED diffusion foam for a cosplay! Fenyx, from the game Fenyx Rising. He has armour AND wings! Wings are a big challenge; I am excited and nervous!

Which conventions/events do you have planned to attend this year?
MCM London and Birmingham of course. I also love attending small local events and cons! We are taking our wands and other items to sell at Edinburgh in October.

What are you most looking forward to for the rest of the year?
Honestly, feeling accepted. Comic cons are the one place that I know I can be myself, I can dress as a character and have fun and be weird! But most importantly, I can hold my Husbands hand, we can kiss and have no fear of receiving abuse or negative comments. I am looking forward to being the most Me I have been in almost 2 years. 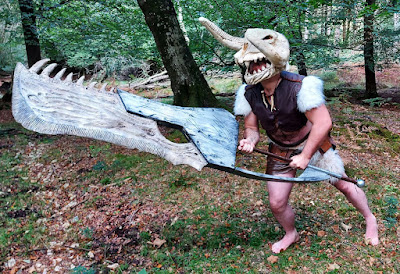 I would like to thank Mr Multiverse Cosplay for his time with this interview. All photos have been provided by Mr Multiverse and were taken by Atuin Cosplay. As always you can expect to see more awesome cosplayer interviews here soon!