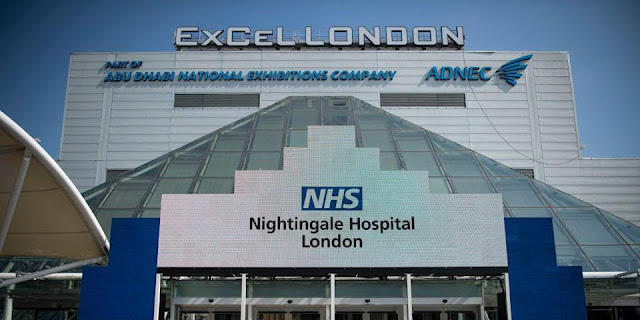 Monday 23rd March 2020 is a day that will stay in my head forever. For weeks leading up to this day the news reports were full of stories and coverage of Corona Virus – Covid 19, hospitals were full, NHS staff near breaking point, death numbers rising.

Watching our Prime Minister live on TV as he addressed the nation telling us we must stay at home, shops and schools were to close, pubs and restaurants to shut their doors, companies were to furlough their staff if they were unable to work from home, I was filled with uncertainty, fear and trepidation. There had been so much rumour, speculation and conspiracy theories floating around on the internet that it was hard to know which way was up. Was the viral outbreak really that bad? Was it just going to blow over in a matter of weeks?

The moment it hit me that our lives and plans for the rest of 2020 were changing drastically, was when photos and video footage was released of London’s Excel centre being transformed into a field hospital. I can’t count how many times I have visited Excel for one event or another but every visit has been filled with wonderful memories, great laughs and good friends. To see the building being retrofitted with medical beds, ventilators, IV stands and NHS staff was terrifying. When I had begun to realise the severity of Covid I joked (darkly) with friends that I didn’t want to go to ‘Covid Con’.

As the weeks turned into months and the months turned into a year it was hard to see the light at the end of the tunnel. None of us knew when we would get to attend again.

For me, cosplay and comic con is not just a ‘fun day out and a cool costume’, it’s an escape, it’s displaying a project I’ve worked hard on for months, it’s seeing friends who are more like family who I only get to see at these events. Cosplay and comic con has been such a big part of my life for so long that I actually don’t remember what I did with my spare time before it.

So, to lose it was really hard.

In March 2020 I was working part time as a nanny. I cared for a beautiful little girl called Melinda who, being 3 years old, loved seeing pictures of me dressed as a princess or superhero. When lockdown came into effect and her nursery closed Melinda’s mum and I decided that I would move in to minimise travel and exposure, mum could work from home and now, so could I. Mum’s job was a high level corporate role which entailed long hours, I went from working 20 hours a week to working 60 hours a week including some weekends.

In ‘normal life’ I was always working on a costume or project in the evenings or at weekends, it was my stress relief. But with no events on the horizon, I suffered that which all cosplayers fear. Loss of cosplay mojo.

I’m a person who thrives under deadlines. I'm well known amongst my friends for planning cosplays months in advance but not starting them until the last minute. I do my best work under pressure and can often be found still finishing costumes at 2/3am on the day I’m due to wear it, Mrs Potts and glam Captain America in particular were last minute races to the finish line. With events disappearing, so did the deadlines…and so did my mojo. I had all these plans and costumes I had wanted to make for the year ahead and poof, all down the drain.

I didn’t turn on my sewing machine once until we entered December and even then it was for making presents, not costumes.

I knew I needed to find something else, something to while away the long lockdown nights that stretched on for months and months. I had a whole room at home full of costumes but nowhere to go with them so I did the next best thing. I wore them to work.

I lived just 20 minutes from my nanny family's house and went home periodically to check on the house and on every return I would pick up more supplies. I started filling my evenings with cosplay livestreams and recording myself reading children’s stories in character which I shared in local Facebook groups and to Melinda’s nursery friends. Being an early years practitioner, early education is so important to me, getting children interested and invested, capturing their imagination is a challenge I love to meet, and the added bonus of having an absolute blast while I did it was the cherry on the cake.

Every day for 6 weeks solid during the first lockdown I uploaded these story videos, I’d tuck Melinda into bed, clean up the toys then jump in to make up and costume and hit record. I found a new way to escape the stresses of the day, the stresses of the news, the stresses of not seeing family and friends, of being stuck within the same 4 walls every day.

The videos were well received with many parents messaging me asking to do their child’s favourite book or asking if I could record a birthday message and on one occasion even video call with a child refusing to do their homework! Merida reading The Gruffalo in Scots proved to be a particular favourite with many of the children in Melinda’s class.

As the weather started to lift and the first lockdown began to ease there were still no events on the horizon and my mojo was still on the loose. The internet was now saturated with cosplayers recording story videos and I had run out of books to read. I needed to find a new way to preserve my sanity.

And that’s where Melinda came in. As I was watching her for a few hours on Saturday whilst mum went for a run she sat with me while I got into make-up, wig and costume to film what was my last story book. When I was finished she asked if she could try on my wig and have some lipstick on. A quick make up session and a wig cap later her eyes lit up as she looked at herself in the mirror. ‘I look like Ariel!’ She said absolutely beaming. I didn’t get the wig back for several hours!

The following weekend she asked again, this time she claimed my Mary Poppins umbrella as her own and ran around the garden belting Supercalifragilisticexpialidocious at the top of her lungs.

What started as a bit of fun soon turned into ordering costumes for her on amazon, full make up sessions and hair styling and photoshoots. Every time she smiled a bigger smile than I’d ever seen. I began looking after Melinda when she was just 10 months old and this little girl had definitely stolen my heart. To see her so happy and loving every minute of dressing up and watching the films featuring the characters she was dressed as lifted my spirits immensely. I saw in her the passion I felt for cosplay, that joy of turning into your favourite princess, villain or superhero, the creativity of posing for photos, the smiles it attracted from people we bumped into when we went on walks to take some of the most perfect photos I’ve ever captured. The girl was a natural in front of the camera and it’s safe to say she is definitely a future cosplayer in the making!

On one occasion we even roped in one of her classmates for a princess friend's photoshoot which produced a level of cuteness that was too much to handle.

As we hit September and life resumed a somewhat sense of normality Melinda’s nursery opened again and my hours went back to part time, but even though I had more free time I still didn’t have any interest in getting back to sewing and creating cosplays. I was starting to worry that cosplay was falling from the wayside, that I wasn’t going to get back into it.

In January 2021 my time with Melinda came to an end as she started at nursery full time and I moved on to a new job in a nursery of my own. Two weeks after starting I was finally hit with covid. Two weeks off work, three months of no taste and smell and to date I am still suffering from fatigue. I work 41 hours a week and most nights I’m in bed and asleep by 8:30/9pm.

It has now been almost 2 years since I have sat at my sewing machine to make a costume. An unfathomable amount of time for someone who always wants a new cosplay for every event. My list of dream projects gets longer all the time but none are getting ticked off.

As 2021 draws to a close, the majority of the UK is vaccinated, shops, restaurants, festivals etc are back in full swing and the first big con post Covid is fast approaching. MCM Comic Con London in October and MCM Birmingham in November are certain to be full of people who have desperately missed the scene. With just 6 weeks to go I have cosplays in mind, now I just need to find that elusive mojo.

Maybe my old self will jump out and surprise me and with a week left I will complete full costumes from scratch. Time will tell.

Stay tuned for Part 2 of this Cosplay and Covid feature I’ll be interviewing some of my favourite names in the cosplay scene to find out how they have coped with life during the pandemic and if the lack of events or social life has impacted their creativity or has ignited a fire under it.

Posted by Daily Cosplaynet at 9:15 pm