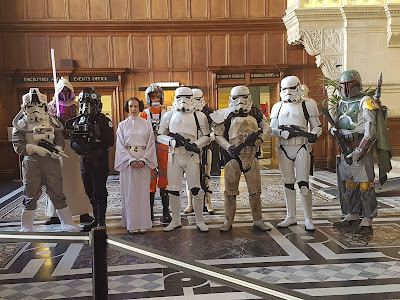 Following my local Comic Con round up recently I thought I’d share my fist comic con review of 2017. This weekend I attended Oxford Comic Con with my partner, son and my pal and fellow Basingstoke Collective Cosplayer Andy Johns.

Following a recent blog post someone has published which has sparked heavy debate among the community online I thought there is no better time like the present to share my thoughts on the recent convention. I thought the blog post in question may have had some valid points however it was delivered in such an aggressive and negative manner that I can’t get on board and I certainly do not agree with his view on cosplay. Personally I do not like people thinking they are more of a fan of something than someone else. The blog post was focused around the person being a Comic fan and in turn slating people for having other interests and not being genuine comic fans. Not everyone has the cash to buy every piece of related merch, not everyone has the time to read every comic or watch every film, doesn’t mean they don’t have interest. I think its bullying behavior to single people out or attack just because they are different to you or don't like the same things you do.

I understand comic conventions have changed over time. Comic conventions these days contain not only comic stalls but other related stalls. After all comics have inspired many films and TV series which have become extremely popular and helped bring comics and the characters to life and bring them into the mainstream. People want related products and collectibles from these fandoms. People attending want special deals, to find things they can’t find elsewhere, to have a chance to get their hands on interesting unique product. But I don’t just want to go shopping and neither do a lot of others. I personally think it works very well to have movie props and various things of interest to see and have photo opportunities with both in and outside the convention. I feel things such as talks, Q&A’s, contests, live music, displays, artists, all help to make the day an family friendly event for all. Special guests have become a big part of conventions which is great however I do feel that people who were hardly seen on screen a very long time ago shouldn’t be there charging for photo opportunities. I feel the guests do help to bring something different however it should be a good opportunity for the attendees at reasonable costs. Tickets for entry cost enough these days so additional extras shouldn’t cost the earth. A convention isn’t just a place which has comic book stands. It’s a place for people in a variety of fandoms to come together. It’s a mixture of being able to see things, do things, buy things, meet people and have fun. Cosplay for me is the heart and soul of a convention. For me a convention is a social event to hang out with and make new friends. I do not agree at all with the comments about cosplay in the other blog post. Ultimately conventions cost money to put on and it’s really tough to keep everyone happy especially with the huge amount of fandoms out there nowadays. Variety is key, I don’t want to be bored, I don’t want to have a quick walk around and be finished in 10 minutes. I want to see new things, meet new guests, find new stalls, learn new things, meet new people. There are some problems which seem to crop up again and again with how some conventions are being run and put together. I like to attend local conventions to see what they have to offer and decide for myself if I would make the effort to return and recommend them in future. 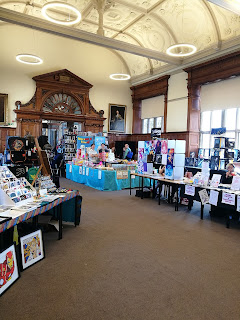 I thought I would share mine and Andy’s thoughts on your experience at Oxcon below: 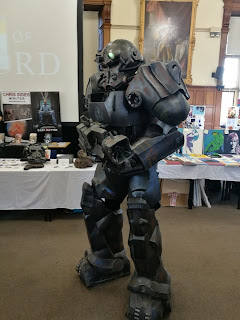 L: They layout wasn’t ideal as there was a few rooms and I was given no guidance as to what was happening where and very little signage to help you find your way. When entering the Comic Con we were not advised what was happening when, where to find basics such as toilets, lifts etc or and schedule of events which would have been really useful.

A: The layout of the con was interesting with the majority of the stands upstairs and a small amount downstairs near the entrance. I didn’t feel like the layout was obvious as it should have been but that’s mainly down to the venue. Maybe I missed it but a map or more signs would have been useful.

L: The building itself was really nice and it was very central. Parking was a difficulty however especially for families which is expected in a city center. Due to the location there want anything happening outside the building giving no buzz and interest around the event which is a major let down. This really helps create atmosphere and bring people in off the street. There was no facility for rest stops or food and drink which isn’t great. If your there cosplaying you really need areas for down time, seating areas and to refuel with food and drink without having to leave the site. Also this is needed for families and those travelling with small children. There was nowhere I could feed my son or even offer him a chance to sit down properly. 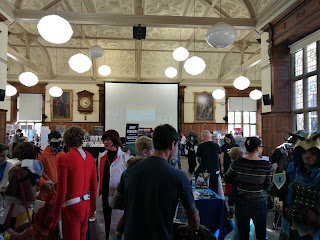 A: Being in the middle of the city there was never going to be any outside attractions such a movie cars/large scale props etc which is something a lot of the other smaller cons are doing to try to add more interest to these kinds of events. I was disappointed there were no photo opportunities inside the building. With so many smaller cons appearing on the calendar there needs to be more to keep the public interested. This is in fact a general criticism of the comic con events across the country; one can only need so many Funko Pops! 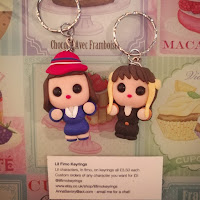 L: There was a good amount of stalls for a local con and a nice mix of types although it would be nice to find a comic con in general which doesn’t focus so hard on having stalls selling Funko Pop after Funko Pop as always. I came across a stall called Lil Fimo Keyrings which make and sell Fimo keyrings in various characters. For those unaware they are small clay baked characters made with various coloured clays. She sells them for £3.50 per character or £5 for a custom character. It seems to be a ‘thing’ now for cosplayers to want to have something in a character they have cosplayed, a little bit of merch/memorabilia that represents their cosplay. It can be really hard which some characters to find things, especially if you’re not on the Funko Pop band wagon. So far I have found Lego characters to fit the bill however now I think I’ve found a new favourite thing as these keychains are super cute! I am not sure if they will survive well as a keychain and I really don’t want to ruin my new cute friends so I will use them for display rather than as a practical thing. 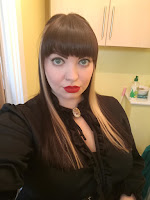 L: There were a few special guests. Unlike other cons I have been to instead of having all the guests together in one set area they were positioned in among the other stalls. I personally didn’t think this worked well as it doesn’t follow what people expect. Also I think people could miss the guest they want to see not being able to find them among the sellers. It works well to have set areas for artists, comics, merchandise, special guests, talks, cosplay zone. It makes it easier to find what you’re looking for in general and to work your way around.

A: It might have been a good idea to keep the celebrity guests in one
place, they seemed very spread out and it wasn’t always obvious that they were in fact guests. I almost missed Virginia Hey (Zhaan from Farscape). I did meet Colin Baker (The 6th Doctor) who was very approachable and was happy to have his photo taken with me.  I thought for a small con the guest list was actually really good. 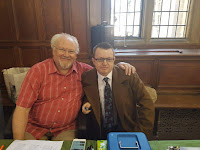 L: I was there when Andy met Colin Baker (The 6th Doctor) and he was very pleasant and made an effort to talk to us. He guessed my character had to be something from Harry Potter and when I started talking he realized that I was indeed Mrs Malfoy. He actually asked me if I had done the online test (Pottermore Sorting Hat) and he said he had done it himself and he is a Slytherin! I'm a Ravenclaw personally but with a touch of Slytherin for Mrs Malfoy of course! In fact even though I only went as a casual non screen accurate version of Narcissa I was recognised and stopped 3 times which was surprising! The hair is what people commented on being spot on which is good to know as its taken months of hard work!

A: What stood out for me with this con was the amount of artists who were displaying and selling their work. Normally you see a few artists but there was definitely a larger number at Oxcon that the norm and it’s great to see talented people being able to show off their work at these events. 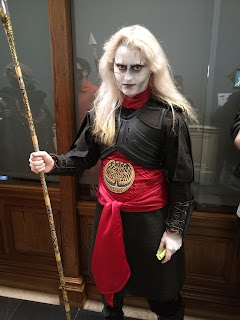 L: I thought for a small convention there were a good number of cosplayers at a mixture of levels. As I have cosplays in progress and was with family that day I went for casual Narcissa Malfoy. Andy dressed as the 10th Doctor. I saw the beginning of the cosplay competition just as I was leaving. This was held in the front of the convention which I thought was bad planning as I was trying to get out with a pushchair and couldn’t properly. With all the space they had it would have been much better in a different area I feel. My friend ‘Loki of London’ won the contest with this incredible version of Prince Nuada!

L: Overall it was a nice day out for a few hours. It’s not something I personally would attend for more than one day and think it’s quite expensive for what it is in comparison to other local conventions which have more to offer.

A: Would I go next year?? Yes, it’s a local con for me so it’s easy to get in to and doesn’t cost the earth. I would however only spend a day or afternoon as there really wasn’t enough there to justify more than that.

Posted by Daily Cosplaynet at 11:55 pm