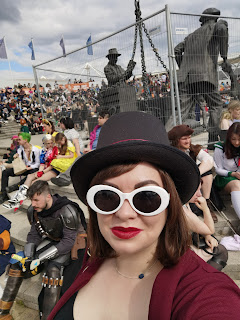 Skye Fawkes and The Wong Cosplay are back for another recap on the next MCM Comic Con that took place earlier this year. Everyone had a great time at Birmingham, and everyone had high hopes for what London would bring.

Skye Fawkes: I went up to London on the Friday night and attended Saturday and Sunday. On Saturday I cosplayed as Johnny Depp’s Willy Wonka as part of a 'Justice for Johnny' cosplay group alongside Nefer Dagaz as Captain Jack Sparrow, The Dolly Dollar as Edward Scissor Hands and Rinba as Sweeney Todd. On Sunday I wore a causal Damian from Mean Girls. Both costumes were last minute and thrown together but seemed to be well recognised. On the second day I was there someone yelled "She doesn't even go here" as I walked in which was great! 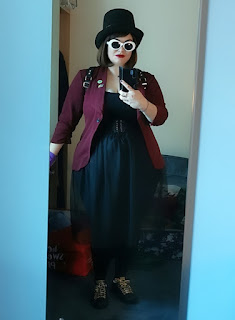 The Wong Cosplay: The con season is well underway, and the biggest con in the UK looks to bring us more of what we love. I returned as my own take on a Jedi Knight for day 1, Wong day 2 and debuting Silco day 3.

Skye Fawkes: My key memories of this con are how hot it was and how busy! It was crazy busy! MCM London is the biggest UK convention and inside the halls its always packed but the shear contrast between Birmingham and the time we’ve had with Covid this was just insane! Everything felt back to 'normal', whatever that is! Even the tuba guy was back! You know your back at MCM when you hear that sound around the venue! 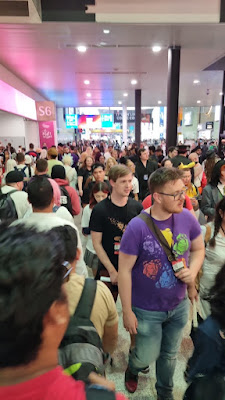 Back in the October comic con last year, MCM featured big-name Marvel stars such as the cast of ‘Loki’ and ‘Daredevil’. This time around, MCM appeared to have chosen to focus the guest choices on a more specific genre, in this case, animation and anime. This meant stars of series such as ‘Avatar: The Last Airbender’ and ‘Legend Of Korra’ with Dante Basco and Janet Varney; The cast of ‘My Hero Academia’.

To name a few of the other stars at MCM this time, we had Erika Harlarcher from the likes of Persona 5, Doug Cockle (Geralt from The Witcher), Ross Marquand (Aaron from The Walking Dead). Noland North had to cancel his appearance due to unexpected circumstances which was a shame for any Uncharted fans. From what I saw the guest tables looked busy with fans waiting for photos and autographs.

In addition to those people, there were a few other TV guests included Ross Marquand’s ‘Walking Dead’ castmate Dan Fogler; David Ajala from ‘Star Trek: Discovery’ and ‘Supergirl’; Tracy-Ann Oberman from things such as ‘Doctor Who’, ‘Toast of London’, and ‘Friday Night Dinner’. We also had who I would consider the headliner, Robert Sheenan (Klaus from The Umbrella Academy). Our writer (and my sister) Ley Ley Cosplay met him for a photo op! He was no doubt the popular choice that weekend, he certainly had the biggest crowd when I walked past!

Walking through the halls you couldn’t miss the hype around the Genshin Impact stand. The queues were huge and constant. Everyone was keen to get their photos and merch! It was certainly the popular talking point of the con.

It felt as though there was more food stands inside the halls than previous years, although thanks to ridiculously long queues I didn’t get to try anything myself. It was good there was more choice. The rest of the usual venues were open however also very busy.

As usual I enjoyed my time wandering around Artist Alley and checking out what merchandise was on offer. There’s always a big range of artists, comics, and merchandise for sale.

Outside the convention by the steps/statue is the cosplay photography playground. Under the trees, by the walls, by the hotels, there’s a sea of people taking photos of all the amazing cosplays. There were lots of meets happening, the grass area full, the loved and hated grey wall backdrops being used! This year however was the return of the controversial festival stage. Its Marmite to con goers, you love it, or you hate it! Its big, loud, takes up space…on the other hand its entertainment and bringing something extra to the outside area. Good thing or a bad thing…. you decide!

The Wong Cosplay Meet Up Coverage:

Fandom Meetups were the big topic of this con. I attended a fair few over the course of the weekend. Of course, being Wong I was the centrepiece of the MoM meet and also partook in the Marvel meet on the Saturday. I also attended the Star Wars meet on Friday, the From Software meet on Saturday and the Arcane meet on Sunday in my debut as Silco.

The MoM meet featured an overwhelming number of Doctor Strange’s depicted in so many different fashions, including MCU looks, Comic looks, and fan made looks like Deadpool strange all of which were so awesome! Many groups were taken, and many a silly TikTok’s made.

The Marvel meet was HUGE. Honestly, I don't think many other meets were quite this big the whole weekend and the organisers for this meet were simply overwhelmed by just how many of you wanted to get involved in the group photos. Looking at the photos I surprised they got everyone in shot.

The Star Wars meet was a celebration of the release of the Kenobi series that dropped that day. So many Anakins and Kenobis showed up to take some group photos alongside the appearance of someone cosplaying the love interest of Kenobi, Duchess Sebtine a character I hadn't yet seen anyone cosplay. This wasn't the only standout of the meet though, of course @iambatsamm as the Second Sister was also present, inquisitor to the Vader that also made an appearance. There was also the Rey with the cutest BB-8 that was rolling around with her. Find some of the standoff photos between the Anakins and Kenobis on our Instagram. 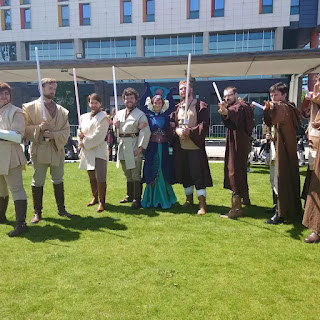 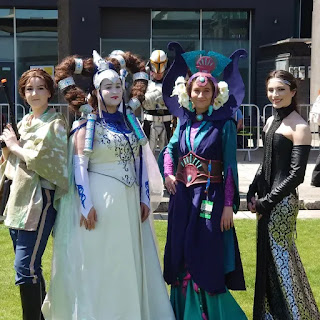 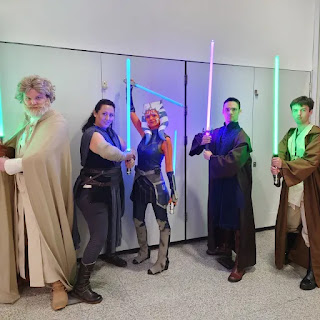 The From Software meet featured cosplayers from across the SoulsBorne series and it truly was a sight to see everyone praise the sun for one of the group photos! With the newest game launching just a few months ahead of the event it was amazing to see some of the incredible cosplays made in such a short of space of time, such as the Ranni the Witch featured on our insta, Malenia and the event organiser as Milena. Not only were photos taken and conversations had, but the meet also featured a raffle for those who turned up in cosplay with collectables, figures etc from the SoulsBorne series in the prize pool. After speaking with the meet organiser, she told us that “The support for the meet was overwhelming and the raffle was successful. I’m glad the weather held up so we could make use of the outside space as this was our biggest turnout yet!” 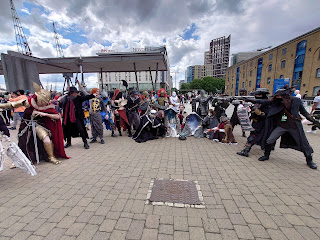 Finally, the Arcane meet…..I don’t think I’ve ever seen so many Jinxs’ and Silcos in one place…Unfortunately I was a little late to the party here, and many of the cosplayers and togs had gone their separate ways before I could back in to the venue (more on that in a bit), but those who I did see and take photos with were amazing! These can all be found on my personal page. 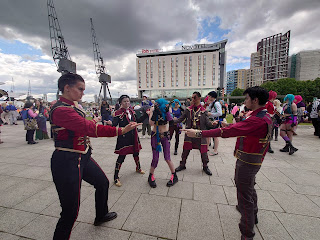 Skye Fawkes: The biggest gripe you seem to hear from people is the security. Being such a huge venue and convention with changing staff etc is inevitable there will be possible issues. Its usually complaints around the consistency of the rules when it comes to props/cosplay. Ultimately, I did have a good convention experience as always! It's the hub of cosplay and popular culture for the year, the main event and it always has something good to offer! I’m looking forward to the next one to see how things evolve.

We’re excited to announce that the stand-out new guests appearing at MCM Comic Con this Autumn have been revealed!
This week's latest MCM London guests are Conor Lindsey, best known for Titans and Man in the High Castle, plus master of human-cyborg relations, C3PO actor Anthony Daniels. Both guests join us all weekend at MCM London, and photo ops and autographs will be available to purchase at the show. 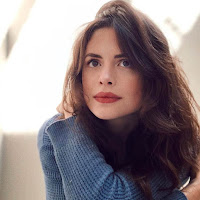 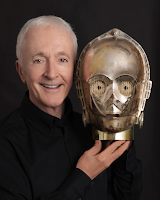 Video game legend and actor Troy Baker, will join us for MCM London! Best known for his work on The Last of Us, Bioshock infinite and Death Stranding, and so many more, we can't wait to welcome Troy back to MCM! 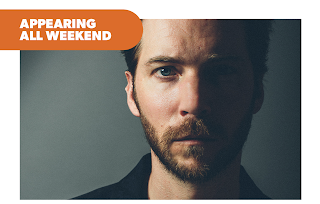 We hope you're as excited as we are to welcome the LAVA crew to MCM London! Robbie Daymond, Ray Chase and Max Mittelman will join us all three days for MCM London! 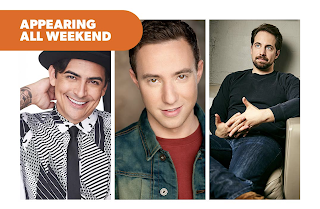 We're so excited to welcome Todd Haberkorn to our MCM London line-up! Todd is best known for roles in Fairy Tail, Dragon Ball Z Kai, Ben 10, and My Hero Academia, and we can't wait to hang out with him all weekend. 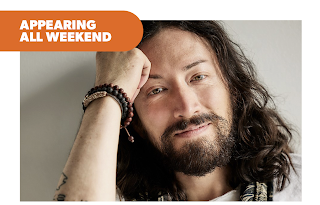 Weekend tickets are SOLD OUT, daily tickets are still available! Photo op pre-orders are coming soon, and autographs will be available to purchase on the day.

We hope to see you there!

Posted by Daily Cosplaynet at 10:25 pm