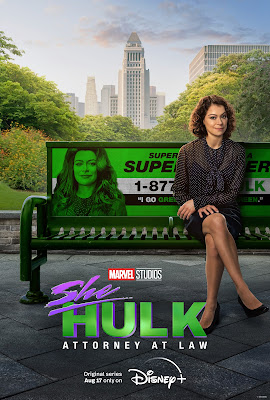 Sammy here with a new review for you!

I met Jeremy at a Saber Guild Alderaan lightsaber meet up and found out that he is a storyboard artist and has drawn storyboards for shows such as; Doctor Strange, Wandavision, The Boys Game of Thrones and many more! I was want to give a special shout-out and say thanks to Jeremy, for letting me share his amazing artwork! 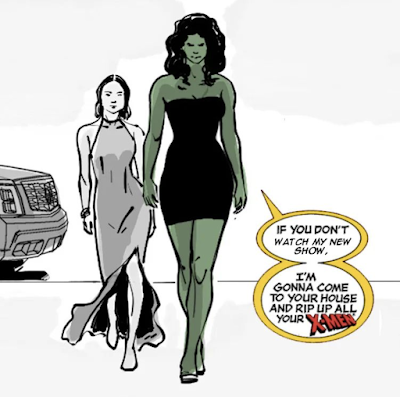 *Please note, there are SPOILERS ahead!! *

*Do Not read any further unless you have watched the first episode! * 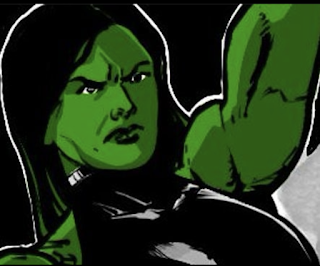 I’ve been excited for this show to come out for some time now. Mostly because I am OBSESSED with the Marvel Universe, but also because I am so excited to see yet another strong, kickass woman becoming one of the world’s mightiest heroes! 😉

I mean, don’t get me wrong, I had the same thoughts everyone else did, when the very first trailer aired. Like, seriously, this CGI is so bad, how could Disney/Marvel do this to us!?

I was worried, but luckily, they listened to the fans and fixed the issue. Although there is a small part of me that thinks it may have been some marketing ploy anyway Ha-Ha! Either way, I’m just glad they fixed it! 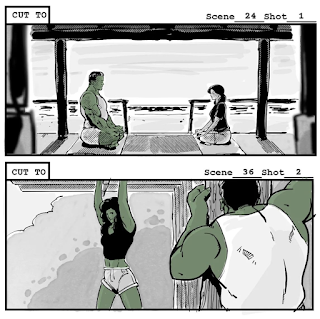 So, this episode basically jumps straight into how Bruce Banners lawyer cousin, Jennifer Walters becomes a Hulk. The two are taking a road trip together, when they drive their car off the road to avoid an alien spaceship. Later, we find out it was a Sakaarian spaceship, which is a pretty cool throwback to Thor: Ragnarok!

Bruce is wearing a device that stops him turning into the Hulk, but this means the accident has caused him to bleed and his blood then contaminates Jen’s wound on her arm, causing her to be infected with the same dangerous level of Gamma Radiation!

In the rest of the episode, we get to enjoy a comedic back and forth between Jen and Bruce (AKA Smart Hulk! Lol!) as he puts her through a series of training tasks to teach her to control her new power. It is a surprise to Bruce, to find that Jen does not contain the same angry alter ego that he’s had to wrestle with for 15 years. After a lot of fun training exercises, a drunken heart to heart, then followed by a huge fight scene, Bruce eventually comes to terms with the fact Jen has way better control over her Hulk (Although, I’m sure this will be tested throughout the series 😉) and allows Jen to return home. 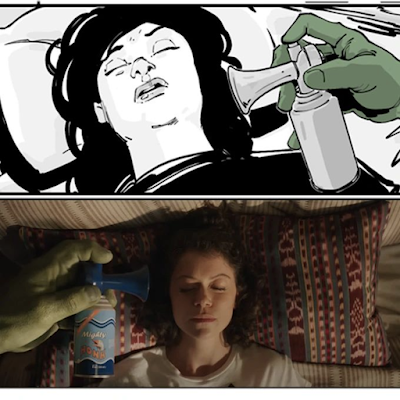 The episode ends with Jen in court ready to give her speech to the jury, when suddenly, a mysterious character (Jameela Jamil) smashes through the wall, causing Jen to reveal herself as the She-Hulk and take down this new threat before slipping straight back into Jennifer Walters – Attorney at Law!

*Credits roll with the song Who’s that girl? By Eve* (which is a great song choice!)

I loved that the show starts out with Jen breaking the forth wall. I wonder if we will ever see She-Hulk and Deadpool meet once he enters the MCU? I feel like there is a chance for some hilarious interactions between these two characters.

I liked that early in the show, Jen is seen reading out her closing statement to her work colleagues, which is something extremely like the famous Spiderman quote “With great power, comes great responsibility.” I don’t know if this was on purpose or just coincidence, but it felt sentimental all the same. Maybe it’s because I just rewatched Spiderman – No Way Home last weekend :P 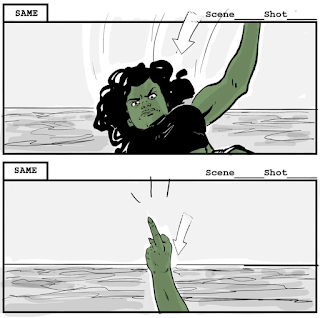 Anyway, this episode was packed full of references to our favourite Avengers, and I feel like it’s been a while since we’ve truly been brought back to that era. Before the car crash in the beginning of the show, there is a funny reference to Steve Rodgers, whom Jen is concluding that he MUST have been a Virgin, because he basically never had a girlfriend (lol) This funny little tribute to Steve was a sad reminder that he is no longer with us, but it is also an insight to Jen’s sense of humour and witty nature. Also, I have to add, I really love the on-screen chemistry between Tatiana Maslany  and Mark Ruffalo it is top notch!

Jen could possibly be one of my favourite new characters to the MCU. She is really funny, and they have really done a great job of making her really relatable. Her comments to Bruce about how Anger and Fear are the baseline of any woman existing literally made me laugh out loud. She turns into a Hulk, but she still sees herself as a normal human being who just wants to focus on her own life and her career goals. Not having the responsibility of protecting the world from danger. I look forward to seeing her character progression throughout the series!

There were some other cool things I noticed in the show, like the scene where Jen is making her way to the women’s bathroom, I spotted a poster with a QR code on and thought, I wonder if that takes you anywhere!? Well, it does! It takes you to the Marvel/She-Hulk web page and offers a free trial for all of the She-Hulk comics! I found this so cool, but my partner just informed me this isn’t anything new, lol, but I found it amusing none the less! 😉 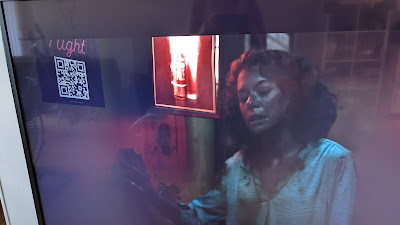 This episode also has several references to the man, the legend, Tony Stark. When Jen  wakes up after one of her first transformations into a Hulk, Bruce has left out one of Tony’s Led Zeppelin T-shirt ‘s for her to wear. He also explains to her that the island they are on is where he spent most of his time during the blip, and that the beach bar was built by the two of them (well, Tony mostly drank the bar! Ha-Ha!) They had even carved their initials into the wood </3. Jen actually carves her initials into the bar near the end of the episode, after they had a huge Hulk fight and smashed the bar. I think this is a really sweet symbolic gesture, it shows that even though Bruce has lost his friend, he now has someone else in his life who can truly understand him.

It was nice to delve a little deeper into Bruce’s story, to show how close he and Tony really were and to show exactly how lonely Bruce’s life is. Even from their very first encounter in the first Avengers movie, you could see they had a lot of respect and admiration for each other, plus Tony liked to annoy the hell out of Bruce, in a brotherly way. I do have some questions that I hope may be answered in this series. I know this show may not answer any of those questions, but I still like the fact that Marvel is laying some baselines for what’s to come!

Like, what did the Sakaarian Shapeship want? Was it a message from the Grand Master? Is this going to be something crucial to any future Avengers movies!? It may be nothing, but alien spaceships don’t generally enter Earth’s atmosphere unless it’s something big!

Also, the fact Jen’s new Hulk blood healed Bruce’s arm, which was severely damaged from using the infinity stones in Endgame. This seems like a pretty big deal, right!? Will her blood play a crucial role in the future? Will she be hunted down so some big bad can use her blood??

What is with Jameela Jamil’s character? Ha-Ha! (If you haven’t read about Jameela Jamil on the internet, I suggest you google her, if you want to be entertained by some really random lies lol! 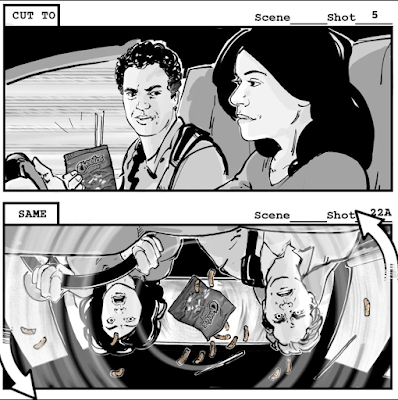 All in all, I really enjoyed the first episode and I look forward to seeing where the show writers take the series!

I hope you all enjoyed reading my review! Please leave any comments below, I’d love to discuss any fan theories!

Posted by Daily Cosplaynet at 6:27 pm