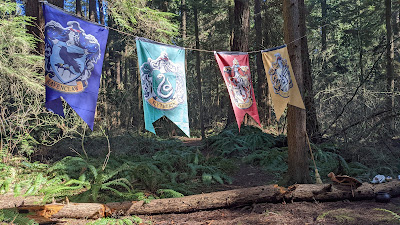 Part 1 – Behind the Scenes

*Before we start, I just want to make this statement.

We, as a group and the Daily Cosplaynet, in no way whatsoever agree with the views and opinions of J.K. Rowling.

This shoot is purely for the love of the Wizarding World that many of us grew up with and how it comforted so many of us and helped a lot of people get through some dark times.

This article, written by @ajaromano just about sums it up:   https://www.vox.com/culture/21285396/jk-rowling-transphobic-backlash-harry-potter

"Happiness can be found, even in the darkest of times, if one only remembers to turn on the light." 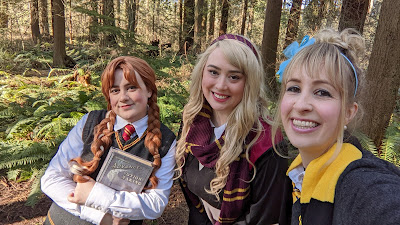 These Disney Characters are going to Hogwarts and have been sorted into their houses; Gryffindor, Hufflepuff, Ravenclaw and Slytherin. Dressed in their Hogwarts uniforms and robes, they are all eager to start their school year, starting with a Care of Magical Creatures class in the Forbidden Forest…

This Disney/Potter photoshoot was a big project with a lot of cosplayers. It took a lot of time to organise, so because of this I’m going to write this project up into 3 short parts!

Part 1 is going to include a short bio about me, a little sneak peek/behind the scenes tour and some details of how this shoot came together and some of the challenges we faced.

Part 2 will include an interview with the photographer Laura, where I will also be showing you some of her amazing cosplay photography. It will also include some cosplayer interviews, where you will find out what the toughest part of making their costume was and why they love cosplay!

Part 3 will be all the final images from the shoot!

So, without further ado, let’s get started! 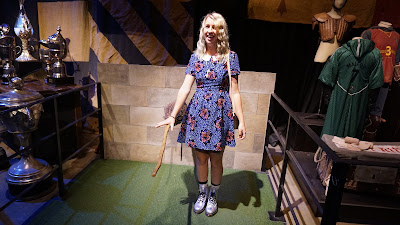 I joined this exciting crossover photoshoot, when I saw a casting call on a Vancouver cosplay page from Laura, the photographer. I’m a huge Disney and Potter fan and I love meeting new people, so I jumped at the chance to have some fun and meet some fellow nerds!

I grew up reading Harry Potter, like many of you reading this. My wonderful mum would go to the supermarkets after work and hunt down the books for me on the day of the release. I would have never lasted until Midnight to wait at the bookstores ha-ha I love my sleep too much; I was always just happy to wait until the next day. There was one time, I believe it was for The Goblet of Fire, that she went to 3 different places just to try and find somewhere that hadn’t sold out. I was lucky that she would never give up and always managed to find me one.

I’m also obsessed with the HP movies. I know they’re not perfect, but there is just something so charming and incredibly magical about them, especially around Christmas time!

I also often put the movies on when I’m feeling sick or sad and they ALWAYS cheer me up. I must have watched them a thousand times over.

I’ve been fortunate enough to visit the Warner Brothers Studio Tour in Watford, UK - twice! It is truly a remarkable place, so if you’re ever in London get yourself a ticket!! 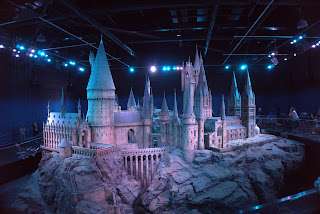 As well as the studio tour, I’ve also visited other filming locations, such as Lacock Abbey, where they filmed Professor Quirrell’s Defence Against the Dark Arts Classroom and the Reptile House at London Zoo. And finally, I was lucky enough to visit The Wizarding World of Harry Potter (in LA, which was still super awesome, but I know Orlando Florida is the OG, and it’s on my bucket list!)

It really was a huge part of my childhood. I’m deeply saddened by Rowling’s tweets over the last couple of years. How could someone that prejudiced and narrow minded have written the magical story that we all love. It truly hurts my heart. And I know a lot of people believe that the only way to show your support for the LGBTQ+ community is to cut HP out of your life entirely…But I feel like that’s a little harsh to expect that of people, especially as it was literally most people’s childhoods. I think if something means that much to you, you shouldn’t have to shut it out completely. I personally believe that you can still love Harry Potter and at the same time be an ally to the LGBTQ+ community.

Anyway…Moving on to the DISNEY in my life!

I’d like to think of myself as a real-life Princess. Well, I can dream! Ha-ha!

Funnily enough, I wasn’t huge on the classic princess stories growing up. I never played with dolls or played dress up. I used to like catching frogs and wrestling. I only started wearing makeup when I was 17, but as I’ve gotten older, the more girly I’ve become and the more I love the idea of dressing up like a princess – hence why I chose Cinderella as my Hufflepuff student!

I have huge love for pretty much all Disney movies. Growing up I was obsessed with The Lion King, Mulan & The Little Mermaid. When Finding Nemo was first released, I must have watched it a million times on repeat…I used to know it word for word! Ha!

And now some of my current favourites include Tangled, Moana, Raya and the Last Dragon & Encanto.

Okay…Enough about me, scroll below to see how this shoot came together! 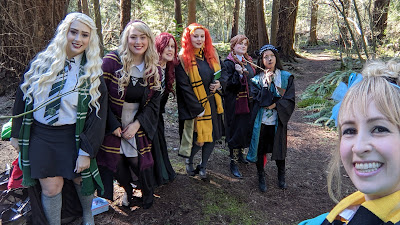 Anastasia - Megara - @I_dont_fit_in_a_box
Troy - Eugene - @wuduptroy
Stephanie - Elsa - @simply.stepunny
Sunny - Scar - @oddisunique
Originally the shoot was to be planned in Winter 2021, with the idea of hopefully getting some snow to get that Hogwarts at Christmas feel, but unfortunately British Columbia was placed under a state of emergency at this time, due to catastrophic floods and mudslides in November ☹ 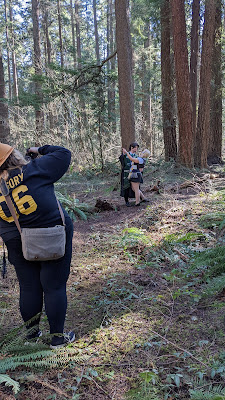 On top of that, Metro Vancouver also received a MEGA snow dump over the holidays, and I mean HUGE. With temperatures dropping well into the minuses and disrupting all modes of transport, this made it practically impossible for us to get together over this period. 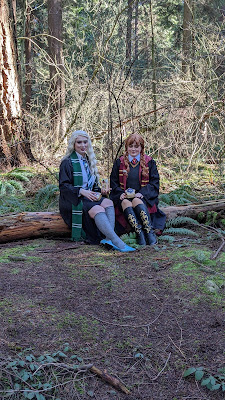 There were also some rescheduling issues due to Covid, which is totally understandable for a group this size. We had some restrictions on what was and wasn’t allowed here in BC and we wanted to make sure we weren’t breaking any rules. We also wanted to make sure that everyone taking part would be comfortable, masked and distanced the whole time if needed. Luckily everyone taking part was Fully Vaxxed which was great! By the time we got around the shooting, the restrictions had eased, and we were all comfortable enough being maskless around one another. There were 12 of us in the end, including Laura, so I’m sure you can appreciate that the whole day took a lot of planning. Even after all the scheduling complications and covid restrictions, we finally managed to find a date to fit everyone and that was with only losing a couple of people along the way.

The location for this shoot was held at Central Park in Burnaby, a city just outside of Vancouver. We ducked into the woods around 11am on Saturday March 5th, 2022. @Lunafox_xo brought her House Banners from her classroom, so up they went in the trees to give us an awesome backdrop! Laura set up her equipment and got to work finding the best lighting and areas to shoot. Whilst this was going on, everyone else just had fun preparing their props, fixing any last-minute things with costumes and sitting around chatting. Once Laura was ready, that was when it was finally time to get our wands at the ready! 😉 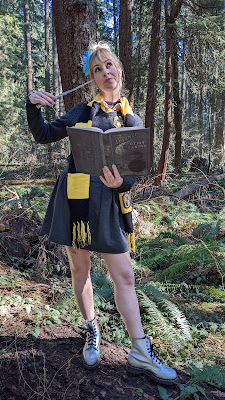 Laura had some challenges with the sun constantly breaking through the trees, but she did a fab job of working around it. Even though it was a beautiful sunny day, there was still a really cold wind in the air, meaning there was lots of jumping around happening between shooting just to keep warm!

I’m sure if we had of had the shoot in snow then we would have put on more layers…Maybe!? 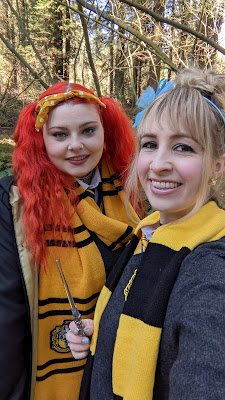 The shoot took around 4 hours which was very long but Laura as a true professional, killed it! It was a lot of work making sure to get all the different group shots such as Classic Princesses, Villains, Sisters, Couples etc and she was fantastic. Honestly though, the time flew by fairly quickly. We had Disney tunes playing in the background and we enjoyed hanging out in between sets. 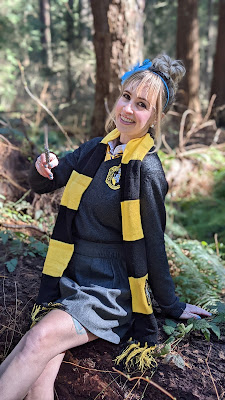 I hope you enjoyed Part 1 of our Disney/Potter photoshoot. Stay tuned for Parts 2 & 3, coming soon!! 😉

Posted by Daily Cosplaynet at 11:24 pm