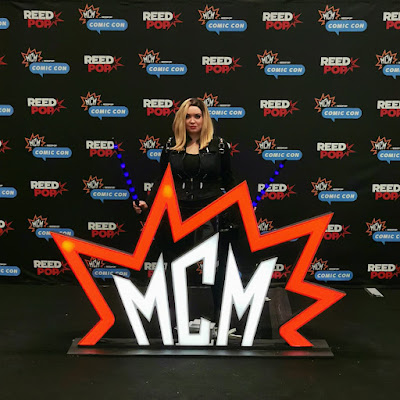 MCM returns to ExCel London 22-24 October for an epic three day celebration of popular culture and most importantly…..cosplay! It’s been two years since cosplayers assembled at the ExCel. There is sure the fear of Covid, the overwhelm of being around so many people, the anxiety of being in crowds, and the concern of how different things might be.

So, let’s talk about what happened. I turned up for the Saturday and Sunday. I heard and saw from pictures that the Friday was a very quiet day, far more so than normal. I cosplayed both days, the Saturday as Black Widow. The Sunday I was part of a cosplay group of the Sanderson sisters from Hocus Pocus with our writers Jolly Holly Cosplay as Mary, Nayru Cosplay (who is my actual sister) as Sarah and I was Winifred Sanderson.

In terms of covid precautions you were asked to show your NHS App QR code for the covid pass upon entry and given a covid wrist band once its seen. When you enter and leave the building you need to show this band along with your entry pass. This worked well in theory however most security wasn’t scanning or checking the actual QR codes. You could have literally shown any screen shot of a QR code and been given the ok. I know some who didn’t need to show anything and were let in. I think personally you should be able to show your pass and show a negative lateral flow test as even if your double vaccinated you can still carry covid.

You didn’t have to wear masks inside the convention halls, but many people did. Obviously, many cosplayers didn’t due to their make-up etc.

The stalls were very spaced out, reduced capacity and social distancing were in place. This may well be to the detriment of the whole event consequently. More space meant less to see and do. When there is less to see and do it make for a lesser con experience overall. The ticket pricing wasn’t reduced yet the convention experience was reduced.

There were times walking around the halls people forgot themselves and social distancing went out the window. This was also the case when con goers asked for photographs with cosplayers, they usually stood right next to the cosplayer without a mask for photos. Generally speaking, you felt safe.

Due to reduced capacity, we noticed the missing retailers both large and small from previous years, the missing artists that would normally be attending and the lack of things such as movie props, cars, big stalls, interactive areas.

I attended the convention as Black Widow on Saturday with Jolly Holly Cosplay attending as 1940s Clare Fraser from Outlander and we had a cosplay group for the Sanderson Sisters from Hocus Pocus for the Sunday. We always enjoy looking around the convention, cosplaying, having photo shoots, exploring my favourite area Artist Alley and generally being immersed in popular culture and the cosplay.

There was the MCM London Comic Con App you can download which really helps to plan the weekend. Pro tip would be to download this before you attend so you can plan your panels and make sure you don’t miss anything. If you’re a family with children this is a must to save the aimless wandering of busy halls trying to figure out what’s available to keep the kids entertained.

I did enjoy the Official MCM Merch store. I personally picked up a zip up hoody and a Captain Carter T-Shirt. It was very busy every time I walked past all weekend. By the Saturday morning there was already items sold out which was disappointing. They had offered pre orders and with how busy the stand was there just wasn’t enough of certain items. I was impressed with the range of items and the quality on offer. In future I would order in advance so not to miss out, however this time I needed to work out my size which you need to do in person. 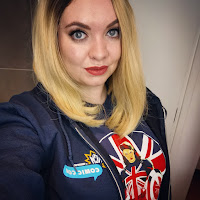 There were a huge number of panels running all weekend including celebrity panels. There was of course a list of top celebrities in attendance with the top name of the weekend being Tom Hiddleston. Therefore, there was so many Loki cosplayers in attendance. There is always the photo and autograph opportunities you can book and pay for with the special guests. There was also SideQuest gaming station, The Treehouse interactive station.

There was also a lot going on in Cosplay Central with cosplay panels, casual cosplay showcase, selfie stations/photo sets, cosplay masquerade and the cosplay hospital for repairs.

We also bumped into the cosplay repair guys. You see the two lads with a big sign saying Free Cosplay Repairs. I happened to see them at the exact time I needed safety pins to keep my Black Widow gun holsters in place. They are fun and friendly, and an absolute cosplay god send! Find them on Instagram under @michaelwhichelo MW Cosplay. If you can’t find these guys there is a cosplay hospital inside the halls so for any emergencies it should be easy to patch things up. 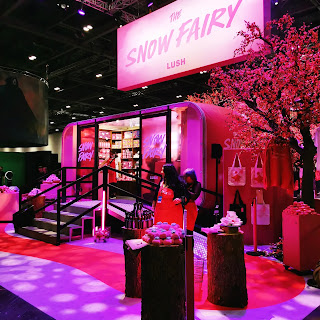 On the subject of cosplay, on the Sunday we attended as the Sanderson Sisters from Hocus Pocus. We turned up with a prop each, a vacuum cleaner, a mop, and an old-fashioned style broom. We were stopped at security and the mop and broom wasn’t allowed in. When you go through security you have the metal detector wands waved over you and bags searched and props checked. They took the props and kept them behind the industry desk for us and we would pick them up to go outside for photos and drop them back to go around the convention. We decided to leave the hoover as there was no point in only one of us having a prop. It was questionable as it didn’t specify in the rules that they wouldn’t be allowed. Although typically the next time we entered we were all allowed in no questions asked. We still took them to the industry desk just in case, but it seems it’s down to each security guard’s interpretation. There didn’t seem to be a set standard when it came to props being allowed in and how searches are carried out. The same situation occurred with the level of bag check, some barely looked, some guards opened your wallet and checked every card etc. There’s a lack of consistency with the security team which was of big discussion with con goers this weekend. All staff we came across personally though were polite and easy to talk to, just a lack of consistency and different interpretations of the rules. 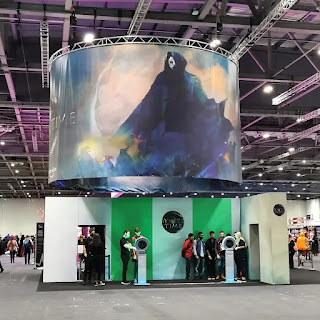 I think everyone now associates the smell of Lush Snow Fairy with comic con after their appearance at the stand this weekend! The stand was lovely, very pretty, and eye-catching. I think all convention halls could do with a nice smelling stand to mask the usual smell of a room filled with a lot of people! Although it was certainly overpowering when close by! The stand didn’t have too much in terms of exclusivity and no freebies which is always disappointing. The staff were very enthusiastic, and I was there for the fun conga line that took place around the stand the end of the day on Sunday which certainly entertained.

We did attend the Wheel of Time Amazon Prime UK stand. This stand had an interactive green screen and 4 video clips from the series before its released on the 19th November. On the 19th of November there will be 3 episodes released and then one a week until Christmas Eve. As I haven’t read the books, I was going into it blind. From what I saw the clips gave a Game of Thrones meets Lord of the Rings vibe. It certainly looks magical, mystical, and full of adventure. The poster that was used in the image above gives a very Harry Potter/teen adventure style vibe with this floating looking 'death eater' looking creature. It looks somewhere between something from Harry Potter and something from Vikings. Apparently this is a cause of major controversy and upset amongst the WOT fan community as its a misrepresentation and certainly gives a different impression than the clips watched and other artwork for the show.

The costumes look insane and something to keep an eye on as I’m sure come May there will be many cosplays coming! I was with Zoe from @wheeloftimecommunity @weavesofthewheel and I feature in their interview after watching the video clip so be sure to check out their pages and MCM videos!

There was a lot of small food stalls in the halls as well as all the usual food kiosks outside the halls. Its always good to see small independent companies you wouldn’t normally find such as T’s Fried Scoop. They are a deep-fried ice cream stand with vegan options! Despite how it sounds it was really good. It would be nice if there were more vegan friendly options around. Some of the usual small food stalls wasn’t in attendance. It’s not comic con without cupcakes so the presence of treat stalls was lacking. The usual problems with the kiosks out of the halls are the queues and the prices as they are heavily elevated. So pro con tip…. take snacks to keep you going!

My personal favourite things to check out are the independent shop stalls such as small business/Etsy sellers you wouldn't normally be able to meet and checking out Artist Alley. I love meeting all the independent artists and seeing the variety and different types of work available. I noticed that some of my favourite artists were missing. I think so many have been worried about how the con will go before committing. I personally didn’t get any artwork this time. I am hoping more artists return for future conventions.

As we were cosplaying, we would of course head to the West Entrance over to the stairs/grey walls/green area to try to catch some of the photographers we know to get some pictures of our cosplays. I did several shoots both days and mainly stayed around the outside area. One shoot we did outside the parameters of the convention to get a different background. I will do a separate post with regards to group cosplay.

No matter what is happening on the inside of the convention, the cosplayers revel in the chance to meet on the outside. Being at those stairs, under the trees, on the green, hang outs at The Fox, at the surrounding hotels all are such a huge part of the cosplay experience at MCM London. Socializing and photo opportunities are usually the biggest part of what the cosplayers go for, and I think even with a lack of stalls and features for the convention they will always keep the cosplay attendees purely due to the opportunity it gives.

For the first MCM back after the pandemic it was great to have comic con running again. There’s been a feeling of underwhelm by what was on offer but nevertheless people had a good time. There’s room for improvement so hopefully by May 2022 things will improve. For every negative there's a positive. I personally really enjoyed myself and it certainly sparked things again and made me look forward to the next event.

Now I’m sure we will see the post con depression/blues and the post con flu kick in across nerds everywhere. So, take your Lemsips and con crunch away over the next few weeks.

Roll on MCM Birmingham 13th-14th just around the corner!

* All photos taken by myself unless otherwise stated.

Editor In Chief and Head Writer
Posted by Daily Cosplaynet at 10:38 pm