Interview with King of the North Cosplay

I came across Chris (King of the North Cosplay) on social media. Chris is a UK based cosplayer, gamer, fitness enthusiast, traveller and film fan. Chris has cosplayed a large number of characters and even trains to get in shape to look the part he’s cosplaying. He has chosen his characters based on suggestions, characters he loves, characters he would love to be and has put great effort to make them come to life. Chris enjoys showcasing his characters with photoshoots and attending conventions around the country.

I have personally found Chris to be a genuinely lovely person, super friendly and helpful. His costumes are incredible so make sure you go check out his Facebook Page and Instagram to see more of his great work.

I have never interviewed a male cosplayer before so this a first for the website! Check out my interview with Chris, King of the North Cosplay below! 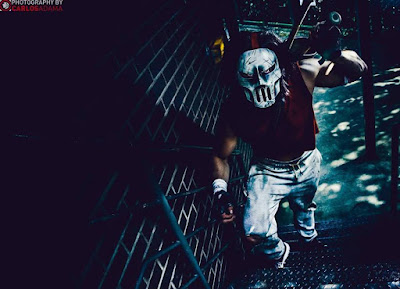 When did you start cosplaying?

I started Cosplaying around three and a half years ago now.

How did you get into cosplay?

Two of my friends went to London Film & Comic Con yearly and took their son/nephew with them. One year they asked me if I wanted to come so I went along. I loved the Convention and all of the amazing Cosplays I saw and they suggested I give it a try and encouraged me to Cosplay Bane from The Dark Knight Rises, played by Tom Hardy.

Which characters have you cosplayed?

Do you have a favourite costume?

I think probably my Chris Redfield (Resident Evil 5 version) People seem to really like it and it was a really good cosplay for me in regards to learning allot of crafting and allot about sourcing Military gear.

Do you act in costume or purely look like the character?

I try to. With Bane I tried to copy his mannerisms and movements from the movie

Do you make/buy/commission your costumes?

All three. It totally depends on the time frame I have and if I have the skill to do something or the time to learn the skill.

What skills have you learnt cosplaying?

My favourite skill is weathering costumes, it’s a process I really enjoy.

Where do you tend to shop for cosplay costumes and accessories?

Ebay and a few Chinese and Korean Airsoft websites.

When you look at a costume, try and breakdown the costume into its individual parts. When I first started I looked at costumes far too much as a whole, over time I was taught to break things down to its basics and I found it helped allot, especially on bigger projects.

Who is your favourite comic book character?
Batman, Wolverine or Gambit.

What are your personal fandoms?

Those who follow your Instagram will know you’re very much into your fitness and even train specifically for a certain character. Can you tell us about your cosplay fitness journey?

I Had been training a few years before my first convention, which is a big reason why my friends suggested I cosplay Bane from Dark Knight Rises, which had come out earlier in the year. But I decided that I really wanted to look as close physically to the character as I could. So I looked at the characters physique and decided how best to train so I would look closer to the character and which body parts in particular to really focus on.

What particular characters have you trained to resemble?

In particular Bane, Chris Redfield, Charlie Nash and Spartacus, they were the hardest changes.

Tell us about your current nutrition and exercise regime and are you doing this for a particular character?

I’ve recently been to a nutritionist for the first time to change up my diet and to a P.T that specialises in training athletes for martial arts. So my training is very different at the moment, twice a day cardio, one session fasted and for weights a combination of compound, functional, explosive exercises as well as very high rep sets for muscular endurance.

Do you have any advice for anyone starting their own fitness journey?

Never be afraid to ask for advice and help. There is always someone out there with more knowledge and experience and you find most are more than willing to help you.

Have you done any charity work as a cosplayer?

As a dab hand at attending conventions and events do you have any advice/do and don’ts to share?

Just to be respectful. Don’t touch someone’s costume without asking if its ok, same with photos. It’s just polite and most of the time unless a cosplayer is eating or having an issue with their costume they will happily let you take a photo.

How do you feel about character adaptations of a costume rather than making a carbon copy of what’s in print/film etc?
I admire the creativity. In the end of the day Cosplay how you want to, in a way that makes you happy.

What is the best and worst piece of cosplay advice you’ve received?

Best: Probably about breaking down costume plans into the bare basics, it’s made life so easier and now I just see costumes as parts.
Worst: Honestly I haven’t really had any bad advice.

What has been one of the coolest things to come from cosplaying?

The opportunity to work at Conventions in Paris and with Capcom who’s games I have loved since childhood right up to present day.

What other cosplayers do you admire?

Do you have any advice for people looking to do cosplay photoshoots?

Find a Photographer and people to work with that make you comfortable and have fun with it.

For people wanting to get into cosplay, what advice would you give them?

Choose a character you have a passion for an just enjoy yourself.

What are your future cosplay plans?

Erm Nathan Drake, Joel from the Last of Us, Letho of Gulet and Damien De La Tour from The Witcher, Night wing and Achilles

Which conventions/events do you have planned to attend this year?

What are you most looking forward to for the rest of the year?

Movies, Spiderman: Homecoming, Thor Ragnarock, Justice League. Games: The Last of Us Part 2, Assassins Creed: Origins and God of War. I have some travels planned to visit friends too, so I can’t wait for that.


I would like to thank Chris for his time doing this interview.  To keep up to date with the King of the North check out his Facebook and Instagram pages.

Posted by Daily Cosplaynet at 10:22 pm