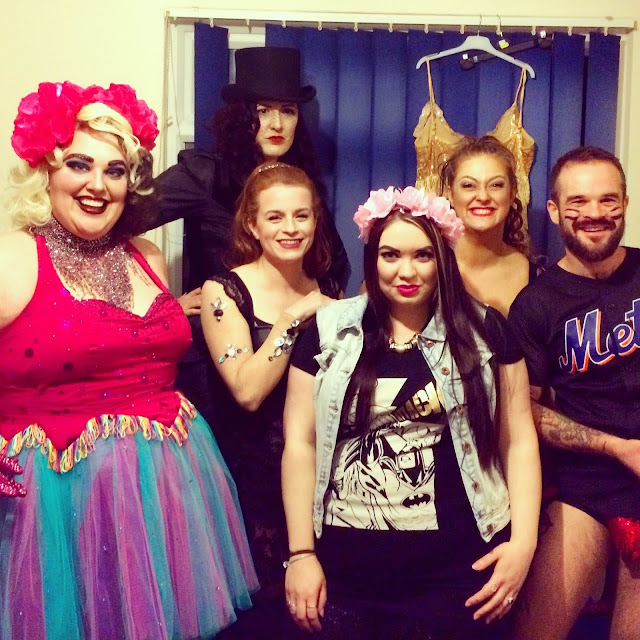 On Thursday I had my first show back at The Tea Bar in a long time and I’m still over the moon with how it went.

I purposefully planned a fun comeback show with a real variety of performances. Our singing, witty, accordion playing comedic compere Anna Lou Larkin was a hit with the audience. I chose 4 performers to keep the audience entertained for the evening.
﻿
First up was local dance duo Katy La Vie and Etta Carmina who are also a part of local troupe The Muses Divine. These girls have an abundance of dance experience between them and kicked off the night with an upbeat fast tap number and opened the second act with a raunchy jazz dance. It was so lovely to see and hear all their friends and family in the audience who had come along to support them.
Next up was Lady May Den-Voyage with her classic statuesque burlesque performances. In the first act we say Lady May’s Graduation which is cheeky, fun, flirty and revealing. In the second act we saw Lady May’s Ride in which we saw a very sexy, beautiful, seductive performance with a very Dita Von Teese feel. I have seen Lady May perform several times now and think she has a wonderful presence and personality and delivers her performances so well.


After Lady May came Rubyyy Jones who is a Tease Bar regular! She showed Basingstoke what neo burlesque is all about starting with her act Knock on Wood act which is soooo funny! The second half saw Pottyyy Mouth Princess which was brilliant! That performance madethe audience think and some ladies in the audience told me how the felt inspired and had a real feeling of girl power after watching! Rubyyy is always a hit here in Basingstoke (and everywhere else she goes for that)!


Closing both acts was none other than Dave the Bear. To close the first act we met Jessica Rabbit and the second act we saw Dave coming from a distance, all lit up like a Christmas tree for his Baseball act! Very fun and loved by the audience. When the audience are chanting ‘Dave the Bear’ at curtain call you know there’s much love there!
For a show with dance in different styles, neo burlesque, classic burlesque, bearlesque , songs, accordion playing and some comedic hosting I think we very much had a variety show with something for everyone and a upbeat fun feel to come back to. Don’t get me wrong, all the planning in the world and some things just can’t be helped…like finding a big hole in the middle of the stage just before show time for example. Basically under the carpet there was a rather large hole which appeared and was only discovered by one of my stage kittens who put her foot in it! We had to get a board, some spare carpet and tape and patch it up before show time and lots of patching up in between acts.  Considering the chunk of stage than now needed to be worked around the performers did fantastically! Other than the floor which was named the ‘rectangle of peril’ everything else went to plan. So far I’ve had some fantastic feedback which is so great to hear.


I am very lucky to have such a great stage team too. It was my first time working with the new sound technician Jake who did a fantastic job. All music was well prepared and the play list for both the hour before show and interval were the best we’ve ever had so top marks to him! I had 2 stage kittens for help due to the layout of the venue.  Dolly Rocker and Kristyl-Rose were on hand helping for the evening; both ladies have kittened for me before and did a sterling job as always. We had a new photographer this time around. Val Rose from Feather Photography was our professional photographer for the evening. The lighting for the show at the venue always makes it difficult in photos but nevertheless she managed to get some cracking shots! A huge thank you to the stage team for all their hard work on the night.


All in all I am really pleased with my come back show. A full house as the venue was sold out in advance, happy staff, happy audience, happy performers. I have now had 2 shows this year and very much looking forward to the others. I have 2 more at The Tea Bar planned so far.

The next Tease Bar show at The Tea Bar is on Thursday 7th July for our vintage summer soiree.

Posted by Daily Cosplaynet at 11:04 pm