Interview with The Atomic Store Basingstoke 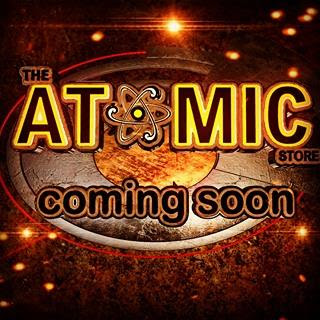 Local Basingstoke folk may have heard through the grapevine that a comic book store may open in the area and I can confirm that there most certainly will be opening one, The Atomic Store opening in August. There are 3 owners, CJ, Beth and Stuart who are all local geeks themselves. CJ had the original idea which was surrounding playing cards such as magic, yugioh and pokemon. Beth works with CJ at Men Kind as Manager and she used to manage Red 5. Beth loved the idea and was interested in developing it further however it was still and idea. They tried to do a little crowd funding but that didn’t take off. Stuart encouraged CJ with the idea and after discussion about the potentials and tweaking the plans and ideas for the store they came up with ‘Atomic Store’. The Atomic Store was born a few months back and its constantly growing. There is a lot to come that you should keep an eye out for and we have their promise that we are first to have all the exciting news! I have interviewed Stuart about the store and here is what he has had to say….

What made you want to bring a store to Basingstoke?

All partners of the Atomic store are local to Basingstoke, and this town has been lacking this kind of store for a long time.
Have you always had an aspiration to open a comic book store?

The idea has been in the pipe lines for years and has only recently started growing to be what it has become now.
I understand you went to MCM Comic Con recently. How did you find your experience?

We did attend the MCM Comic-Con which we enjoyed thoroughly. The atmosphere, the people and the merchandise available is fantastic. Would recommend to anyone interested in that world.

Did you find any comics of interest?

There is always comics of interest, especially with what is happening in both the marvel and dc universes.

Tell us your thoughts on cosplay?

Cosplay is amazing, allowing people to come out of their shells, be those heroes or even villains that they know and love.

Will you be stocking any cosplay items at all?

We will be hoping to stock some, only time can tell as to how much.

Whereabouts in Festival Place will the store be opening?

That's to be confirmed.

What do you have planned at the moment for the big launch?

We have a few ideas in the pipe line and will be released closer to the time.

Do you think Basingstoke has a big enough fan base in the area to make this store work for you?

It's not just Basingstoke we will be surrounding areas will also help build a strong base, but we do believe that Basingstoke alone will carry a large enough fan base.

Your Facebook page states comics, cards and collectables. What kind of products can we expect to see in store?

We will be stocking a range of comics, cards such as magic, yugioh and Pokemon, as for collectables we will be stocking pops, all kinds of figurines, we are hoping to stock some props, memorabilia and a few other treasures.

What fandoms will you cater for?

We will do our best to cater for as many fandoms as possible. The comic fandom, card world's, collectors and even just the new to crowds.

Will you be stocking merchandise for anime, pop culture, figures, games, etc?

We will stock merchandise for all of the above.

What do you think of the new interest in comics with the superhero movies becoming popular over the last 10 years?

With the build-up in all the superhero movies over the last 10 years it has bought in a large number of new age geeks, New interests and made it so much more acceptable to be a geek.

What do you think are the best new comic series coming out at the moment?

Each of us have our own opinions on this, pretty hard question to answer. There is so much going on in the latest captain America series, leaving a lot of people shocked and some even upset. Also in the dc rebirth, a lot could be said and loved. With the release of the series preacher, reading through that comic series is amazing. I know that's not really a direct answer but I guess that just shows how many quality comics are out and what a hard choice it is.

Can you get hold of hard to find/rare items?

Will you be stocking geek fashion/clothing/accessories etc for both men and women?

Not at first, it’s always a possibility for the future...

Will you be getting involved in ‘Free Comic Book Day’ May 6th 2017?

Will the store hold any events and if so what kind?

We will be holding events, from card events, comic events and we will be hoping cosplay events as well.

I would like to thank Stuart for his time with this interview and we all look forward to the updates to come in the near future.
Local geeks I myself have something for you!! I have recently set up a Facebook group Basingstoke Cosplay and Comic Club.This group is for geeky nerds with a keen interest in comic books, superheroes, anime, manga, tv/film, games, cosplay, conventions, shows, exhibitions etc. This group is for people with similar interests to get to know one another. You can post questions, ideas, costume info/ideas, links to things people may be interested in, geek fashion, events, reviews, advice etc. As the group builds local meets can be arranged from small meets at bars, coffee shops, seeing latest films together, meeting at stores to attending larger events as a group or with individual members.  This is a friendly group therefore any form of bullying, abuse, body shaming will not be tolerated at all. This is a discrimination free group. Please do join us whether you are local or not it’s such a great social place and we will do meet ups local and at conventions etc so everyone can get involved!

Posted by Daily Cosplaynet at 10:16 pm