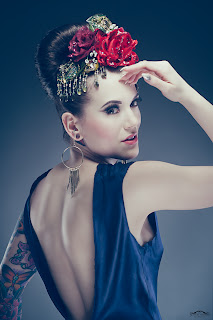 In time for the bank holiday weekend I thought I’d give you the latest instalment of performer interviews with the lovely Beatrix Von Bourbon. Let me tell you a bit about this lady to get started.


Beatrix Von Bourbon (28) began performing burlesque in 2006 and has been voted one of the top 50 burlesque artists worldwide for 3 years running (2009-2011: 21st Century Burlesque). Early in her career she was filmed performing by Ken Russell at an arts festival event in Bradford. She's performed at shows ranging from Latitude Festival to corporate events for Channel 4 and Google. In 2008 she received her first 3 month variety theatre contract (Stuttgart, Germany). After gaining new fans, the show director invited her back the following year. Her connections in Germany have lead to performances at Bread & Butter fashion tradeshow (Berlin) and for leading German electronics retailer, Saturn. In Spring 2012 Beatrix appeared on Britain's Got Talent (Series 6), entertaining the judges and earning herself a place in the live semi-finals. Simon Cowell alikened her to a “British version of Dita Von Teese” and Reveal magazine picked her out as one of their favourite contestants. Her famous audition caused a nationwide stir, sparking 70 Offcom complaints, frontpage headlines and an interview on ITV's This Morning. The controversy did not deter the BGT producers from featuring her in the live semi-final, where she was seen by over 8 million viewers. Guest performer Labrinth stated that she was his favourite act of the evening. Beatrix uniquely combines a warm, friendly and charismatic personality with her heavily tattooed appearance and risqué performance style. Alesha Dixon remarked "you are actually a class act".


Besides performing several times a week at venues such as Cafe De Paris and Crazy Bear in London, she teaches burlesque courses on behalf of Burlesque Baby and blogs for Erotica UK. Outside of the UK, she is one of three resident judges at the annual Berlin Burlesque Contest, held every July. 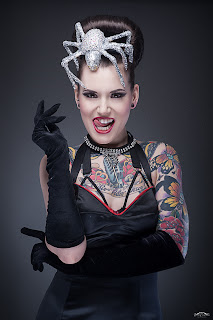 How did you get into the burlesque industry?

It's a long story, but as I wrote for another interview I did recently, it can be expressed as the following mathematical formula:


Do you have a favourite routine/performance?

My favourites change quite regularly, but at the moment I'm really enjoying performing my revamped Sex Spider number. I recently altered the costume for the umpteenth time, adding in some heelless shoes, a floor-length gown and a spider headdress finished with hundreds of cut-glass crystals. This is the 4th incarnation of the costume, though the choreography of the act has been adjusted on an ongoing basis. I'm now looking to change the music (again) to reflect the change in costume.


I love re-energising a tired act. Acts become like old friends, so saving the good ones from being relegated to the retired pile always feels rewarding.


Your hair always looks amazing and those claws….incredible! How often do you have to get you lovely talons manicured? Any advice on hair and nails for the fans?


I spent many years avoiding getting manicures, I thought they were an indulgent waste of money. However, over recent times I've become more practical, making a lot of my own costumes and even gardening! Home manicures were getting chipped within days and taking hours out of my schedule to complete. Somehow, painting my nails at home seems to demand a larger dry-time than at the salon.


My first manicure was only a year ago. I thought I'd try Shellac for a lasting finish... but I became addicted to having long nails! My natural nails are very brittle and split constantly. I now wear a full set with tips. I like looking down at my hands and seeing them look clean and tidy. Seeing chipped nail varnish all the time doesn't give anywhere near as much pleasure.


I shopped around for a favourite nail salon, eventually (thanks to Banbury Cross) finding Kat's Klaws in Turnpike Lane. The team there are all really fashion-conscious and will readily do trendy finishes like stiletto nail shaping and glitter dissolve nail art. A nail technician that knows how to command glitter nail varnish is some kind of Goddess.


As for my hair, I've always played around with up-dos, ever since I was a teenager. I've had my fair share of disasters, but have certainly learned technique through my errors.

My advice to anyone is to simply have fun! For nail art inspiration, look on Instagram and Tumblr. There are tonnes of excellent DIY tutorials for doing impressive finishes like ombre colour at home. The same goes for hair. Have a look at some tutorials online and give them a go at home. Find out what works for your face/hair type and don't be afraid to experiment... just perhaps not with boxes of permanent dye or bleach!


On that note how to you keep yourself in shape for your performances?


Actually, I find my performances keep ME more in shape! I recently took over a week off performing and found that my lack of posture-awareness tied my back up in knots.


I'm not a very flexible performer. Indeed, as an over-excited dancer in primary school, I dropped into the splits at a school disco and tore up my groin. I've not been able to get closer than a few inches from the ground since. I try to work on my flexibility by going to hot yoga a couple of times a week. It's expensive, but knowing how much money I'm forking out for an hour and a half helps to motivate me to work as hard as possible in class.


I work most efficiently when I have an instructor pushing me to my maximum, so when I'm very flush, I like to have personal training sessions on a power plate.


In school I hated running and ever since I've seen running as an enemy that must be tamed. I struggle with running out in the open as I find seeing the distance I've run to be a distraction – outside, I'll judge distance according to relativity rather than scientific units. When on the treadmill, I can't see how far I've run in terms of the local area, so I can focus on my distance goal without distraction. I feel a great sense of achievement when I manage 5km in half an hour, but my hip flexors tend not to feel the same. I have rusty hinges for a few days afterward.


Tottering around on high heels often gives me shin splits, so I do try and take care of my calf muscles, stretching them and warming up before donning the skyscrapers. I could do better, though.


Jessie J versus “pimp at a funeral”


Where are you favourite places to shop?


What are your must have pieces of make up?


I only tend to wear make-up on stage. If I had to pack a very minimal kit for the stage, it'd be:

What do you like to do with your time off from being Beatrix Von Bourbon?


I love going to see live performance, so a perfect night out would probably involve a show somewhere like the Roundhouse or The Barbican. It would be sandwiched either side by dinner at my favourite restaurant, Cafe Relax in Düsseldorf and cocktails at Pouring Ribbons in New York.


Who is your favourite burlesque performer to watch?


I recently saw Lux LaCroix perform at an intimate New York venue. She has such command of her body and is a Mistress of the stage.


Who are your biggest inspirations and why?


Currently I'm on a bit of a Marcel Duchamp bender. Other recent inspirations include Hussain Chalayan, The Blonds NYC and David Bowie.


What advice would you give to a girl reading this interested in getting into this industry?


It's unlikely to give you financial wealth, but if you plant enough seeds of passion, they might bloom into a spiritual fortune. 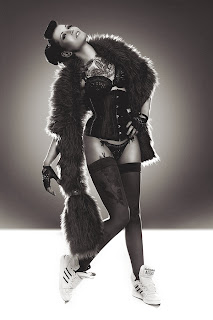 I would like to thank Beatrix Von Bourbon for her time with this interview! Something very special is just around the corner…very excited to share it with you! Stay tuned!
xoxo
Posted by Unknown at 6:09 pm